Mock Rookie Draft for the 2020 Class


With the NFL draft upcoming, the incoming rookie class is garnering most of the headlines. From a Fantasy Football standpoint, redraft owners everywhere are wondering which rookies have the talent and capability to be worth a roster spot in their first professional campaigns. Meanwhile, dynasty owners will be looking to provide a boost to their rosters with rookie drafts in the coming weeks.

With this in mind, several writers here at the Fantasy Hot Read got together and did a one-round mock rookie draft. This mock was held with superflex, tight end premium and PPR scoring in mind. The results are  below, along with the rationale behind each pick from the respective writer who made the selection.  While it remains to be seen exactly where these players wind up, most will likely have the draft capital to see some opportunities in their maiden NFL seasons.

For more on several rookies primed to make a Fantasy impact in 2020, click here!

Taylor is poised to be the most impressive RB from Wisconsin. Over the last two years of college, Taylor posted back-to-back seasons with over 2000 yards rushing. In 2019 he silenced doubters of his pass-catching ability by doubling his career targets and tripling his career catches. He capped it all off with an impressive, although not shocking, 4.39 40-yard dash. Taylor is a generational back that isn’t being bandied about as such. Comparatively speaking, he’s lightyears ahead of Leonard Fournette at this same stage and Taylor is an easy pick at 1 overall.

While Johnathan Taylor (who was the first pick here) is the favorite of a lot of draftnicks, the truth is that Swift is much more suited for the current NFL game. He was incredibly effective catching the ball in space in college and has some of the softest hands in the draft. Taylor meanwhile dropped almost 20% of catchable balls that came his way last season.

Swift may lack the ideal “homerun” speed, but he is an incredibly effective runner who isn’t afraid of contact. His pass protection can absolutely improve, but this should not prevent him from seeing the field as a rookie. He may not be the name the most people talk about, but he absolutely has the ability to be the most productive back in this class for fantasy, and NFL purposes.

With the fist two picks being the top two running backs, the 1.03 offered a pick of the litter of talented wide receivers. With many good choices, Lamb was the selection as he should have the most upside in year one. A physical player, Lamb can take any reception to the house. He has a mixture of quickness and hands which make him the most complete of all the receivers coming into the league this season. He has the highest chance of success no matter which team ends up taking him in the draft.

Speed has taken over the NFL at a variety of positions in recent years. At the wide receiver position specifically, Tyreek Hill of the Kansas City Chiefs has become one of the game’s most dominant threats thanks to his unmatched quickness. Ruggs is the most comparable receiver to Hill in the 2020 draft class. He stands 5′ 11″ tall and weighed in at 188 lbs at the NFL Combine (Hill is listed at 5′ 10″, 185 lbs). He showed off his blazing speed with a 40 time of 4.27 seconds.

While in college at Alabama, Ruggs was the second receiver option behind fellow draftee Jerry Jeudy. While his 40 receptions and 746 yards in 2019 pale in comparison to Jeudy’s 1,000-yard season, Ruggs’ average yards per catch was a whopping 18.6. That number would have ranked third in the NFL last season, behind only Mike Williams (20.4) and A.J. Brown (20.2). Ruggs has as much upside as any wideout in the class and will be a major deep threat no matter which team ultimately selects him.

Having the fifth pick and seeing both Swift and Taylor gone with the first two picks, I had to really decide if I wanted to secure a solid running back option or go another route. Jerry Jeudy was available, but as a fantasy owner who tries to get solid running backs early on, Dobbins was my choice. Considering how strong the wide receiver position is in this year’s draft class, taking one of the top three rookie running backs over any of the other wide receivers available at number five was the safest play.

The thought process behind selecting Jeudy was his upside. From the Panthers’ pick at seventh overall to the Vikings’ at 22, there are multiple teams in need of wide receiver talent. In most mock drafts, the former Alabama wideout has been going to the Jets at the 11th pick in the first round. If that is the case, he will compete with Jamison Crowder for the top spot on the depth chart. Jeudy, Lamb, and Ruggs III are all going within a few picks of each other and they’re all interchangeable. At the end of the draft, Jerry Jeudy could be the first or third receiving option on any team.

Cam Akers was an exceptional high school QB and on occasion exhibited his throwing prowess in college. Unfortunately for Akers, he was forced to learn the position of RB behind one of the worst OL groups in Power 5 football. This is evidenced by his 0.9 yards before contact over 2018-19. He still managed to put up some numbers, mostly through his 33% broken tackle rate. An underrated aspect of Akers’ game is his ability to excel in multiple systems. As a freshman, he ran very well in Jimbo Fisher’s pro-style scheme but was equally as effective in Kendal Briles’ up-tempo offense in 2019. He has run behind zone and man schemes and excelled despite still learning the position. If drafted to the right team, Akers could be a steal at this spot.

Clyde the Glide posted monster numbers as a junior and excels in ball security, evidenced by an incredibly low fumble rate. He is an instinctive runner who finds success in any area of the field. While he’ll need to improve as a short-yardage back and power runner, he will consistently make plays in space (over 35% of his carries went for a 1st down or a score last year) and he should find himself at minimum being the lightning piece of a committee.

With the first eight picks being position players, Joe Burrow fell to me at pick nine. This is great value in a superflex league and being all but drafted to the Bengals already, he is going to be the starter from day one. No matter what you think of his skill, being the number one pick means he is going to get every chance to compete for the next five seasons. With this in mind, he is the clear pick as the first quarterback to be taken in drafts. Others like Tua Tagovailoa or Justin Herbert may have better careers, but until we know the exact landing spots, Burrow is the safest bet. 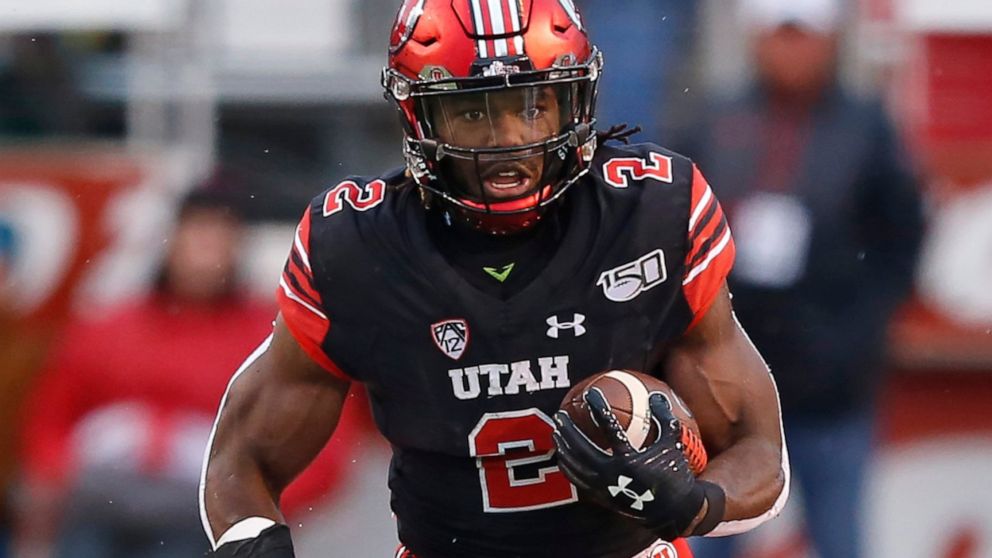 From an overall prospect grade standpoint, Moss was not the best available when the 10th pick rolled around. However, the fluidity of Fantasy Football drafts can lead to changing plans on the fly, and you can’t be afraid to adjust. With six running backs already selected, not taking Moss here could have caused major headaches in finding a back as the hypothetical rookie draft continued, especially if the team had an existing need at the position (a real possibility in dynasty formats).

No one can deny that Moss has the ability to be a workhorse back. The 5′ 10″, 222-pounder totaled 214, 179 and 235 carries over the 2017-19 seasons respectively. He topped 1,000 yards rushing and had double digit touchdowns in each, with his 1,416 yards (6.0 per carry) and 15 scores in 2019 serving as his best outputs for both categories. Moss has also shown an ability to produce as a receiver. There is a concern with durability, as he suffered multiple injuries in college including a torn meniscus and sprained AC joint. While this might hurt his draft stock a bit, the do-everything back has the talent to carve out a role in year one at the NFL level.

At this point, running backs were flying off the board with Akers, Edwards-Helaire, and Moss all going before pick #11, leaving me with an option for a wide receiver or a stab at the QB position. Burrow was also taken before this pick, leaving me with Too Tagovailoa or Justin Herbert, but the best overall pick at #11 was Justin Jefferson. I would’ve targeted a running back like Moss, but since he was taken right before my pick, Jefferson was the best player available.

With having the last pick, there were no valuable running backs left and the wide receivers were slim. Deciding to select Justin Herbert was based off of two things: 1) he is a possible Week 1 starter and 2) diversity. I could’ve chosen a wideout such as Denzel Mims, Tee Higgins, or Jalen Reagor, but it’s uncertain whether they’ll be first round picks, something that is not a concern with Herbert. The former Oregon signal-caller is most likely going to be drafted in the top 10 picks. The Dolphins, Lions, Chargers, and Jaguars are all teams that could use Herbert’s service. He can take over at any point of the season as a team’s starting quarterback.